The Struggle to Save our Wild Fish 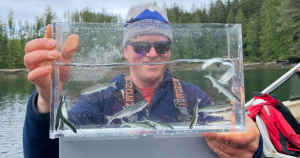 Salmon researcher Jody displays a sample of juvenile wild salmon virtually free of lice. The fish were collected from a location near a former fish farm, just one season after it was phased out of operation. (Barnes Bay, Discovery Islands, May 29, 2022)

In January of this year, the three main salmon farming companies in BC, Mowi Canada West, Cermaq Canada and Grieg Seafood (all Norwegian owned), sought a judicial review of former Fisheries Minister Bernadette’s decision to terminate the licences of 79 open-pen salmon farms in BC waters when they become due for renewal on June 30. The companies argued that her decision ignored several DFO reports that found the farms posed “minimal risk” to wild fish, and the decision didn’t reflect “an appreciation of the facts.” Not mentioned was the fact that these reports are likely flawed, given that for 10 years DFO and their provincial counterparts suppressed knowledge of the presence of an important and serious non-native viral pathogen, piscean reovirus (PRV) in wild salmon population. Most likely brought to BC waters by Atlantic salmon tranferred from Norway to populate the farms, PRV causes massive organ failure especially in chinook salmon, the main food source of endangered southern resident orcas (and many other species). The judge presiding over the review decided for industry, and Minister Bernadette’s order was suspended.

As I have written before, “the intransigence and arrogance of this industry seems to know no bounds…. The writing has been on the wall for a long time that sooner or later industry was going to have to change. For them to be acting now as though they are surprised and not adequately consulted (“blind sided” in the words of the presiding judge) is somewhat disingenuous, to say the least. They’ve had years to find ways to smoothly change their practices, but instead there’s been nothing but denial, obfuscation and resistance. Meanwhile in other places around the world there are big investments being made in developing successful land-based salmon farms. The longer BC resists joining this movement the more our salmon industry will be left behind.”

Most of the Discovery Island farms are currently empty of fish, and if Minister Murray needs any more help in making her decision it came this week in an email from Stan Proboszcz of Watershed Watch Salmon Society. On May 28-29, his team took a zodiac to Barnes Bay in the Discovery Islands to visit the sites of fish farms that have been removed or are currently not in use. What they discovered astounded them!

Researchers there have been sampling juvenile salmon in this area for years. When farms were filled with Atlantic salmon, their sampling in this area routinely pulled up juvenile wild salmon infested with lice. Since December 2020, Discovery Island fish farms have been slowly emptied, and with nearly all the farms now empty the juvenile salmon that the researchers are pulling up are virtually lice free.

The evidence is clear: open-pen fish farms infest juvenile salmon with lice, drastically reducing their chances of survival. Removing the farms offers immediate and measurable benefits. Similar arguments can be made for the dangers of the clouds of viral pathogens released by these farms into the wild salmon migratory routes.

While Stan’s team’s discovery is a good news story for salmon in the Discovery Islands, where farms have been removed, fish farm licences outside this area are still a problem. As the June 30 deadline approaches, rumors continue that Minister Murray is working on a plan to transition salmon farms out of B.C. Though in the last federal election her government promised to do this by 2025, it would be travesty if these factory farms are allowed to be in the water for another three years. The big risk is that we may see another election before three years pass which could further delay farm removal. Wild Pacific salmon simply don’t have time to waste.

Minister Murray needs to hear from us. Tell her about the immediate positive impact of removing fish farms from the Discovery Islands, and encourage her to go and see it for herself. She needs to know we expect her to side with British Columbians and not with the foreign fish farm industry. Can you call her now?

Getting rid of the toxic salmon farms is only a first step in giving our wild fish a fighting chance to survive. There are numerous other threats they, and we, must contend with — habitat destruction (especially siltation) from logging and mining, rising ocean temperatures and salinity from global warming, toxic effluents in their spawning rivers, Alaskan overfishing of Canadian-bound migrating salmon, and a century of genetic dilution by fish hatcheries. Do you notice what all of these have in common? Yes, they are all human-caused. This means humans can do something about them. But one step at a time – let us begin with the simplest and most immediate: removing the farms. Please take a moment to call Minister Murray now.

Thank you for supporting our incredible wild salmon, and all that they support – the entire coastal food web, and we humans who depend on it.