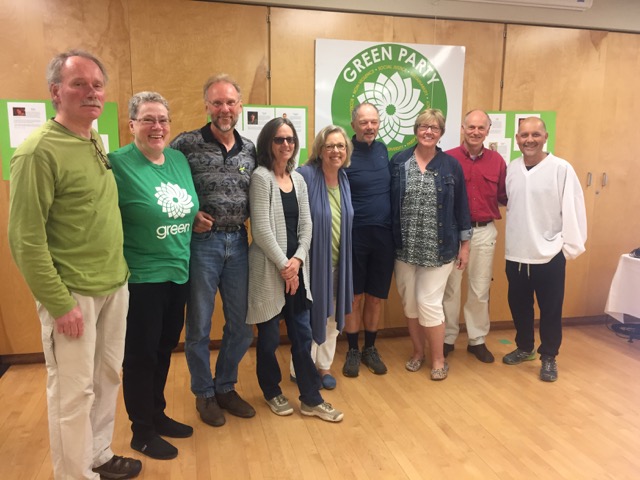 Photo caption: “Six Greens from the Courtenay-Alberni and North Island-Powell River federal electoral districts travelled to Sydney yesterday (June 10) to attend the Annual General Meeting of the Saanich-Gulf Islands (SGI) Green Party of Canada Electoral District Association. Shown in the photo, from left to right: LeRoy McFarlane (CEO of NIPR EDA), Megan Ardyche, Mark de Bruijn, Sue Moen (all from the NIPR EDA), Elizabeth May (Leader of the Green Party of Canada and MP for SGI), Don Munroe, Sharon Edwards (both from the Courtenay-Alberni riding), Thomas Toewen (Coordinator of the SGI EDA), and Adam Olsen (newly elected BC Green MLA for the provincial riding that overlaps SGI).”

SGI is Elizabeth May’s riding, and the EDA there is probably the most active and enthusiastic in all of Canada, for all parties — according to Elizabeth! So it was an exciting opportunity for us from the north end of the Island to see how a mature EDA operates its AGM, and have fun mingling with fellow Greens from the south. An added bonus was the Elizabeth’s presence, as well as that of Adam Olsen, the newly elected Green MLA for Saanich North and the Islands provincial riding.  Meeting Adam Olsen was a special treat, and he gave a wonderful and heart-felt talk on some of his experiences in Victoria as one of the three BC Greens that were elected to the Legislature on May 9. It is clear that Green values and perspectives are already having an influence on our provincial government.

The highlight of the day was spending a few moments with Elizabeth, and hearing her give an update on her latest experiences in Ottawa as she continues to build relationships to further the values dear to Greens across the land, and to hold Justin Trudeau accountable for the many election promises he has dashed, such as electoral reform.

She is also at the forefront of the Green movement worldwide. She told us of the Global Greens Parliamentarians association, of which she is co-chair. She talked about the discussions at the UN Oceans conference she had just attended in New York, co-led by a Green member of the Swedish parliament and co-leader of the Swedish Green Party. Next weekend Elizabeth will be addressing the AGM of the German Greens to share our perspective on CETA, the Canadian European Trade Agreement.

At the end of the meeting, we all shared in several home-made birthday cakes and other goodies in honour of Elizabeth’s birthday the day before. What a wonderful time of warmth, relationship, and making new friends. Together, we have an exciting year ahead of us as peoples’ values and vision of what is possible continue to shift into a new paradigm for planet earth!

Impressions of an AGM

This is some of what we heard from each of the optimistic speakers at the GPC SGI AGM on Saturday: Dave Charles, Michael Strumberger, Adam Olsen, Thomas Teuwen, Elizabeth May…all modeling for us what it is to be true and dedicated leaders…

We are on the cusp of a paradigm change in Canada. With the synergy from over 400 Greens elected to national governments around the world (many more have been elected at provincial, regional, municipal, etc. governments), the global Green movement is rapidly developing into a major political and social force.

Wonderously, the modern Green movement is a product of vision from the top down coupled with grass roots action from the bottom up. The impact of Greens on the world will come through both.

What do EDAs do between elections? Well, here are a couple of examples:

As an example, we NIPR volunteers will again be assisting on Canada Day in Campbell River by encouraging and monitoring the recycling program at the various festivities throughout the city. This was a highly visible and much appreciated service at last year’s event. It fit in perfectly with Green values, and it was a ton of fun!

One of the byproducts of such efforts is that when an election rolls around, it translates into support at the polls. As was said by Adam Olsen, Greens are not elected by Green party members. Our votes come from people who simply like what they see in Greens, and through us see the possibility of doing things differently.

Increasingly, we are seeing a world facing numerous crises, all embedded in a planet whose climate is entering a time of rapid and profound change as a consequence of unbridled human ambition. The Green movement worldwide provides, at a political level, a truly different alternative that seeks to provide inspired renewal in how we govern, design and live in our communities…and the entire planet.

All who share this vision, to whatever extent, are invited to join this dynamic, vibrant and empowering global movement. The Green Party of Canada welcomes all. To find how you can play your part, please contact the North Island-Powell River (NIPR) Electoral Association through the links on this website.