Old-Growth Forest Defenders Ramp It Up!

This photo is from the August 8 protest held in Nanaimo on August 8. It was called by Extinction Rebellion Nanaimo.  At the time there was a hunger strike going on in an effort to focus the BC NDP’s attention on citizen opposition to their continued logging of old-growth forests. In response to that hunger strike, Doug Routley, the BC NDP member for Nanaimo-North Cowichan, said, “…the province’s anticipated strategic review of old-growth forest management is coming by late summer or early fall, and will include “immediate actions.” 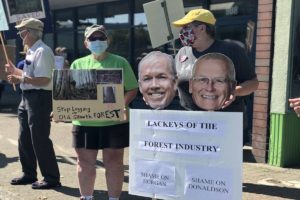 On August 12, there was a protest in Campbell River in front of BC NDP MLA Claire Trevena’s office. The Campbell River Mirror actually sent a reporter to cover it, which was wonderful. Again the trope about the Old Growth Strategic Review Panel report coming out in “late summer or early fall” was trotted out, this time by Forest Minister Doug Donaldson. 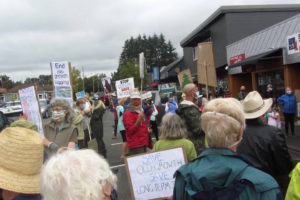 On August 20, more people gathered in Courtenay, in front of BC NDP MLA Ronna-Rae Leonard’s office. A couple of people even washed Ms. Leonard’s office window in an effort to help her see more clearly since she so obviously has not been heeding the increasing urgency felt by her constituents. 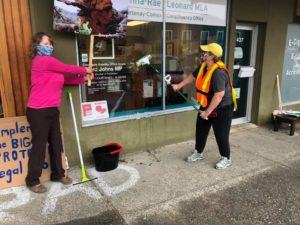 And, just in case Ms. Leonard still had trouble seeing through her now-clean office windows, this was the over-riding message.

…and then there’s Fairy Creek in Port Renfrew

If you follow the issue of old-growth logging in BC (and you wouldn’t be very Green if you didn’t), you probably already know about the blockades at Fairy Creek. Here’s a “dispatch from the field” from one NIPR supporter who was there recently.

Following the Courtenay rally for old-growth last week, my friend Lori and I decided to visit the newly established logging blockade near Fairy Creek. Fairy Creek is a tributary of the San Juan River, on unceded Pacheedaht territory. It is the last intact and unlogged valley of the San Juan watershed, the whole area of which was once famous for its big trees.
Logging company Teal Jones is in the process of blasting roads to access Fairy Creek, but many people, ourselves included, believe passionately that it is time for companies to turn their focus away from logging the little old-growth left on Vancouver Island and focus in on second-growth instead.
Following advice, we took all the necessaries for wilderness car camping in the time of COVID, including tents, cooking equipment and food, table, chairs, flashlights, masks and hand sanitizer!
We travelled from the Comox Valley south, then inland through Cowichan Lake and on towards Port Renfrew. The road was paved all the way to the turn-off to Granite Main. It is then 6.7 km on that gravel road to the blockade camp, and while definitely accessible by car, I was glad we had a truck with heavier tires and better clearance.

Large banners hanging across the road announced the blockade. We were greeted and made welcome to set up our tents alongside the road behind the main tent. There were about six people when we arrived; some had been there for ten days or so, some had just left, and others arrived during our stay. It is a ‘COVID safe’ camp, with social distancing encouraged, and hand sanitizer front and centre.
Each morning, volunteers get up at 4 am to staff the blockade, because loggers can start work early. But within a day or two of initially setting up the blockade, the road building crew seems to have stepped back, and at least for the time being, there has been no further contact. The fact is, several blockaders have heard through the grapevine that at least some forest workers are not entirely against the campaign. They understand the blockaders are in support of second-growth and value-added logging jobs, and are only against the logging of old-growth.

Lori and I pitched our tents close to nearby Renfrew Creek. We set up our table and stove near the main kitchen tent, then joined the others to eat our meal around a campfire at a social distance. The talk was thoughtful, wide-ranging and introspective, from concern for old-growth, the climate, water and salmon, to concerns about the Pacheedaht First Nation, on whose land we were camped, and what might be the employment opportunities if indeed old-growth logging could be stopped.
In fact, figures show that on Vancouver Island and the SW Mainland, over 90% of the valley bottom, big-treed old-growth has already been logged; just 2.6% is formally protected in parks. On Vancouver Island alone, 32 soccer fields of old-growth are logged every single day including some of the last old giants. It should be obvious to anyone that change will be forced upon the logging industry soon enough.
Why not, we ask ourselves, why not make the necessary changes now, and save the last of the irreplaceable wonder that is old-growth forest, for all of its enormous cultural, emotional and spiritual appeal, its vital ecological values, its scientific value, its huge carbon storage.

It is indefensible violence to plunder this living treasure for short term gain.  An old-growth forest is much like a cathedral, with its soaring trees, filtered light and muted colours, the sense of mossy age, the quiet beauty of song, and the sparkle of wild flowers in spring like light through a stained glass window.
To someone who says, ‘The logged forest will grow back’, I say, raze Notre Dame, sell the bricks, and then try to rebuild. It cannot be done. Just as there are colours in the stained glass windows of Notre Dame that cannot be replicated by modern science, (colours due to impurities in old processes), so too, there are living connections in old forests that have not yet even been discovered by science, let alone studied.
Lori and I stayed two nights. We marvelled at the beautiful little grotto, complete with waterfall and crystal clear pool, two minutes from camp; we stood in quiet awe at the foot of a giant cedar; and we were up at 4 in the morning one day to staff the blockade. The brilliance of countless stars shone over the deep darkness of the forest, the campfire was soon kindled into flame, and we sat and drank tea, quietly talking until dawn broke and the others slowly awoke and joined us. I am so glad we went.
PS: The NDP Minister of Forests, Lands and Natural Resource Operations has not released the Old-Growth Strategic Review, completed April 2020, despite it being promised for “late summer or early fall.”  Old-growth is liquidated daily while we wait.
For further info, see https://www.youtube.com/embed/kBnhktwJIo4 and https://www.focusonvictoria.ca/forests/25/
Also see the Facebook page Fairy Creek Blockade and Ancient Forest Alliance.
And go visit if you can.

Join communities across BC as we march for the forests.

It’s time to build a new forest framework that respects nature and gives power back to communities.

There is no time to waste and the BC government must be pressed into taking immediate action.

Organizers and volunteers are needed in all towns, cities and watersheds in BC. If you can help, email forestmarchbc@gmail.com.