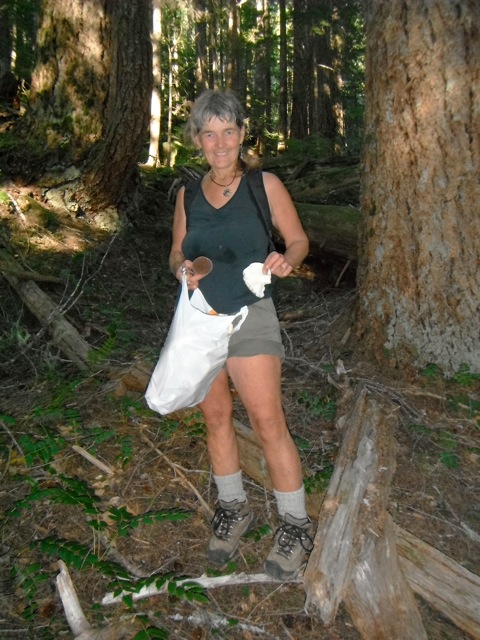 As part of a series of “Living Green” interviews with local Green Party supporters, I had the pleasure of interviewing Comox Valley resident Susan Holvenstot.

Susan spent a month this past winter visiting indigenous occupation camps in Northwestern B.C., to prevent the use of these unceded lands for LNG and tarsand oil exports.

In her answers below, you will find out how she demonstrated her Green Party values to become an ally of indigenous efforts to stop pipelines and tankers on our coast.

Q. Susan, thanks for taking the time to participate in this interview.  I heard you had a pretty interesting winter. What were you up to?

A. I went to two different places in Northwest B.C., Unist’ot’en, near Houston and Lelu Island, next to Prince Rupert, where First Nations people are reclaiming their land. They are building and living in permanent camps in the line of proposed pipelines.

I went to visit these two locations and help run the camps for a month during the winter.

Q. What are the communities hoping to accomplish with these camps?

A. Northern B.C. is awash with industrial development, much of which we aren’t even aware of in other parts of B.C. and Canada. There are dozens of proposals for pipelines and natural gas infrastructure all across Northwestern B.C.. Some of the pipelines are for tar sands oil, but others are for new infrastructure for Liquid Fracked Gas.

The First Nations people are at the front lines of stopping this from happening. They have unceded ownership of the land, and are constructing and living in these camps as a way of stopping further exploitation of their land.

Q. How did you get involved with this?

A. I was following what was happening in First Nations communities and I heard about these two camps in particular.

I wanted to go in the winter, to experience the snow, and because I knew they would need people in the winter to help run the camps.

Q. What do one of these camps look like?

A. I stayed at one camp for 3 weeks, run by the Unist’ot’en Clan, which is one of the 5 subsections of the Wet’suwet’en First Nations. This was 30 kilometers south of Houston (i.e. west of Prince George, and south of Smithers).

The camp had been there for 4 years before I arrived. There are 6 buildings. Two of the buildings are large, well-built structures, including a 30-person bunkhouse, with bunks, mattresses, and bathrooms. It’s approximately 30 feet by 50 feet in size.

The other major building was the Healing Centre, which was two stories and included a dining room, commercial kitchen, and a large pantry. It was used last summer by the Unist’ot’en Clan for salmon canning.

Q. What did you do there?

A. My main role was to live in the camp, with 6 others, and keep it running. I worked on a permaculture garden, and checked the camp’s trap lines every other day.

When I arrived, I brought in fresh food, produce, cheese, etc, which was a welcome sight for the camp residents.

We also recorded helicopter flights that were happening in the area.

Q. What were the helicopters doing?

A. We were pretty sure that they were surveying the land for the pipeline companies. The number of pipelines that are proposed in Northwestern B.C. is alarming. We saw a lot of helicopters during that month.

Q. Where are the pipelines proposed to run?

A. The main pipelines are planned to end at Kitimat, Prince Rupert, and Vancouver.

(please see the map below) 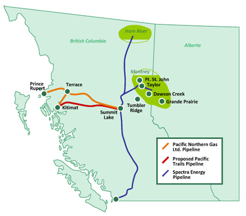 Q. What were your instructions if a pipeline company tried to enter the Unist’ot’en Clan’s land?

A. One person in the camp was designated to ask people trying to enter the land 4 protocol questions:

4. “Have you ever worked for any of the companies that are trying to extract resources from our lands?”

We were also in constant phone contact with Freda, who is the official spokesperson from the Unist’ot’en Clan.

Q. Were there any incidents while you were there?

A. One evening, at around 9pm, a truck stopped at the gate.

Now, normally, the gate isn’t locked because some of the band members worked for a logging company, and some logging was occurring on the territory, which had been agreed to by the elders. The loggers often worked at night, because it was freezing at night and easier to transport the logs.

The people, known to the camp, always turned off their headlights when they approached the camp gate, so that they could be seen.

However, on this evening, the truck stayed at the bridge near the gate, with its headlights on for about 6 minutes, which was really odd.

I thought to myself, “Somebody should go out there.” One of the people from the camp approached the gate.

The pick-up truck backed up quickly, turned around, and spun its tires as it drove off in a hurry.

In the 6 minutes that they were there, they disconnected and stole the big flood light which was mounted on a pole, cut a big banner saying “Unist’ot’en Land”, broke a window on the shed beside the gate, and took the log book where we recorded who entered and left the camp.

Q. What did you do next?

A: We called Freda, the spokesperson, and then called the RCMP. They arrived in about an hour and filed the incident.

Q. Who do you think they were?

A. We aren’t 100% sure, but they could have been some locals that worked for a pipeline company, or just some youths up to some mischief. 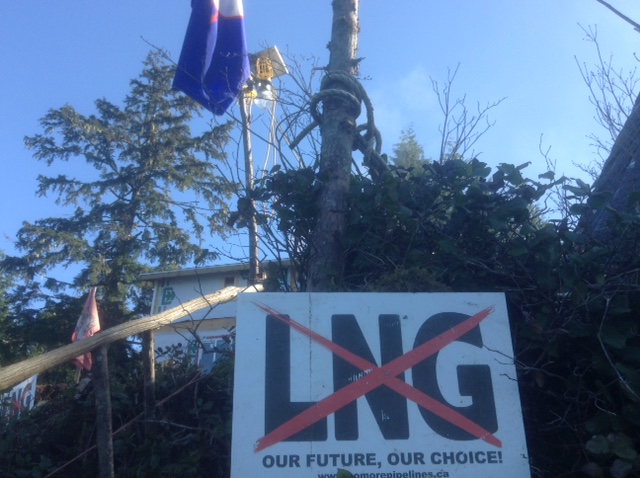 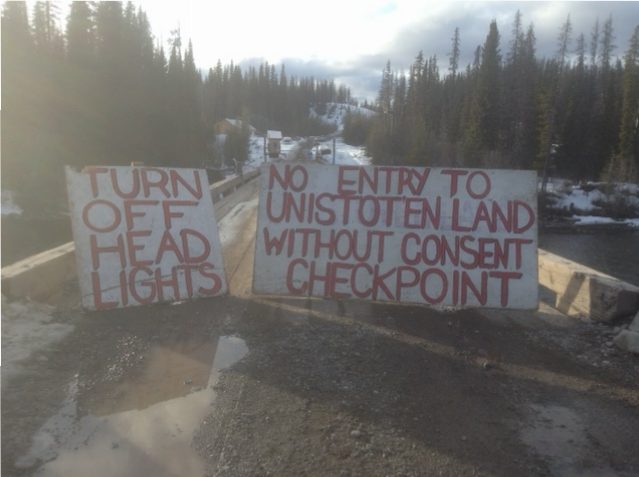 Q. You said you visited a second camp. Was this a similar type of camp?

A. No, it was quite different. I visited a camp on Lelu Island, just outside of Prince Rupert at the mouth of the Skeena River.

This camp is run by the Tsimshian First Nations, and along with being a major transportation route, the Skeena River is a vitally important ecological area. There is a large eel grass estuary there, which is quite important for salmon.

The pipeline companies want to put a huge Liquid Fracked Gas processing plant on Lelu Island, right in the middle of this estuary.

Q. You have been using the term Liquid Fracked Gas. I thought it was called Liquid Natural Gas, or LNG.

Q. What are the benefits and downfalls of LFG?

A. Politicians often say that LFG is a “cleaner” fossil fuel because at the site of its use, LFG uses less carbon. However, the extraction and mining of LFG uses as much, if not more, energy than other carbon sources. Politicians aren’t telling the truth about the real energy use of LFG.

Q. What was the purpose of this camp?

A. It was mainly there to monitor the boats coming and going from the area. It was a relatively new camp, only in operation for 6 months, with 1 large building and a number of tents.

Q. How optimistic are you that these camps are actually working to protect the land?

A. During my time at the two camps, I was amazed at the strength of the First Nations people, in support of their land.

Even the courts are gradually coming around to support the notion that “these people own the land”. Unfortunately, Governments and industry don’t agree with this.

Q. What was the greatest success that you were a part of?

A. I think simply being there, showing these First Nations communities that I was there as an ally in their efforts. We are all guests on their land.

I enjoyed being there, and spending time in such a peaceful environment. I enjoyed getting to know the land, and having the chance to come back to Vancouver Island and share my experience with others.

Q. Were there any disappointments or failures that you experienced?

A. I was hoping to meet the Elders, but they weren’t at the camp in the winter. The camps are much more active during the summer.

Q. How does your experience relate to the 6 Green Party values?

A. The leadership of the Northern B.C. First Nations people that I interacted with were committed to non-violence. They are Matriarchal-led and they used a non-violent approach of living on their land as a way to stand up to the pipeline expansion. The First Nations people are very calm, positive, and content knowing that they are doing the right thing.

The First Nations people have an ecological wisdom about their land. They have a long-term link with the land, having lived there for tens of thousands of years. Their way of life clearly demonstrates sustainability.

Finally, First Nations communities have long avoided any extreme wealth imbalances. They “get” social justice, as evidenced by the pot-latch tradition. We need to listen to them, as they have tremendous wisdom in how to care for each other.

Q. Tell us a little more about yourself and how you typically spend your time.

A. I live on a rural, shared property in an 800 ‘ house-trailer-greenhouse. I ride my electric bike everywhere, don’t eat much meat or animal products, and live well on a poverty line income. I mostly garden and hike, now that I am retired.

Q. Susan, thanks again for your time and for sharing your experience with us. You are an inspiration to us all.

A. Thank you. I just played a small part, but together, we can make a real difference.

We hope you enjoyed this interview in which Susan Holvenstot models Green Party values and active participation in issues that affect us all.

If you have a suggestion of a North Island – Powell River Green Party supporter that we should interview, or if you would like to share your personal story with other Green Party members, please email us at northislandgreens@gmail.com