Sometimes called “the Canadian Galapagos,” Mitlenatch Island is a BC Class A Nature Provincial Park located in the Salish Sea between Campbell River and Powell River. This little treasure trove of biodiversity comprises only 155 hectares, with an additional protective 300-metre water “boundary” beyond the high tide line. The tides from the north and south ends of Vancouver Island meet around the island, creating a biological richness in the surrounding waters. The island is in the rain shadow of Vancouver Island’s mountains, resulting in a semi-arid ecosystem that receives considerably more sunshine during the west coast’s normally wet and dreary winters. It is a unique ecosystem in the middle of the Salish Sea.

This unique habitat has long been known to Indigenous peoples who made seasonal camps to harvest bird eggs, shellfish, fish, berries and plants. Generally, when SE Camp Bay is windy, Northwest Bay is not, so one of the Salish names means “calm waters behind.” In 1894, the island was acquired by the Manson family of Cortes Island, who used it as summer pasture for sheep and cattle. When post-WWII plans included using the Island for Lancaster bombing practice, in 1959 the Mansons sold the Island to the Province for $1 on the condition it become a nature park.  In 1961, it became the first such designated area in Canada.

The primary role of Mitlenatch Island Nature Park is to protect a unique island ecosystem and its special natural features. Perhaps the greatest of these is its birds, and it has been designated one of Canada’s Important Bird Areas (IBA) – part of a global network of essential habitats for the world’s bird populations. With over 1000 pairs of Glaucous-winged gulls, it hosts the second largest breeding colony of this species in the Salish Sea. Significant populations of pelagic and double-crested cormorants and pigeon guillemots also breed on the rocky crags. Crows, ravens, harlequin ducks, marbled murrelets, rhinoceros auklets, oystercatchers, and even a pair of Virginia rails, along with dozens of songbirds and other species make this their home or visit during the spring and summer. 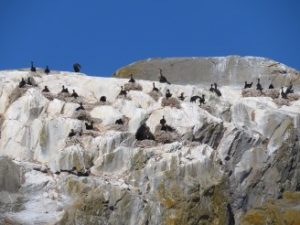 Stellar and California sealions, harbour seals, river otters, and BC’s largest garter snakes are also common. And in the past few years there’s been a growing number of orca and humpback whales feeding around the island.

The hot, dry Mediterranean climate support many sun-loving plants, including a number of BC’s rare and endangered plant species, and species usual to the coast like trembling aspen and prickly pear cactus. When the flowers bloom in late spring-early summer, it’s a glorious place to just hang out and drink in the beauty, but as the limited moisture dries up these quickly go to seed and disappear. 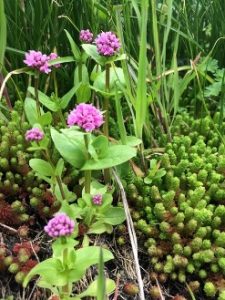 The Nature Park’s secondary role is to offer day use opportunities primarily for nature study and appreciation. Access to the park is by boat only, and the island has no docking facilities requiring boaters to anchor in the temporary calm-weather anchorages of Northwest Bay and Camp Bay. Due to the sensitive bird habitat, most of the island is closed to the public. Public access is limited to the beaches and a short trail that connects the two bays, which provides excellent viewing and photographing opportunities for flowering plants within the meadow and for seabirds through a viewing blind.

The island is a very sensitive ecosystem, extremely prone to damage by visitors who venture off the designated trails. From the end of March to mid-September, Mitlenatch’s integrity is preserved by a team of 30-plus seasonal stewards known as MIST (the Mitlenatch Island Stewardship Team). These volunteers live on the island in weekly shifts supported by BC Parks. They are dedicated to conducting citizen science projects such as plant phenology (tracking the seasonal cycles of the native plants, especially in relation to climate change), dead bird counts, monitoring and recording bird sightings into Cornell University Ornithology Lab’s eBird global bird database, and conducting intertidal surveys. This year we also began tracking and recording snake sightings – BBC TV plans a documentary on the island’s large, harmless western terrestrial garter snakes. It was exciting to discover a snake den! 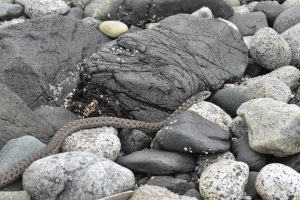 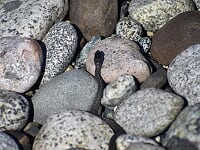 There are also more mundane duties: cleaning and maintaining biffies, keeping trails clear, and helping eradicate invasive plants such as the super vigorous Himalayan blackberry. Since the only way to reach the island is by boat, a major role is to welcome the 2000-3000 yearly visitors, helping them learn about the special place they’ve just put ashore.  And there are rules! — pets must stay on board; camping, parties and fires are not allowed; walking is only on the well-marked trails; and bird viewing is restricted to the bird blind.

A Mitlenatch volunteer steward’s life for that one special week each year (if you’re lucky enough to be chosen!) is a unique mix of ruggedness (completely off-grid, and sharing your simple open-air living quarter with the mice and marauding ravens) and peacefulness (despite the almost 24/7 seagull cacophony during breeding time, and the sometimes uproarious din of sea lions). Social life is limited to interacting with day visitors and living with your teammates. There’s plenty of good honest work (battling the invasive brambles and conducting the science studies). And there’s even a little time for play, kayaking in the bays, swimming in the brisk sea, enjoying the antics of the abundant wildlife, and relaxing in the warm sunshine (when available!). 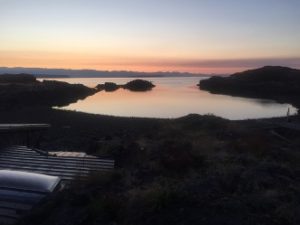 There is a magic to Mitlenatch. It has an aura all its own. During this short week of a Mitlenatch volunteer steward’s life, it’s the quiet moments when the privilege and benefit of the role hit home: in the sweet, warm air of a dead-calm night, the Milky Way sparkles brightly overhead, the unseen humpbacks blow, and the phosphorescence drips off your paddle into the ink-black sea, one remembers something of one’s place in the universe, and is reconnected with its endless beauty.

For a steward, it’s a great privilege to retreat to the bosom of Mother Nature once a year and to serve the needs of other species, and experience the gift of renewal in return.

Check out some of the amazing photos of this special place.