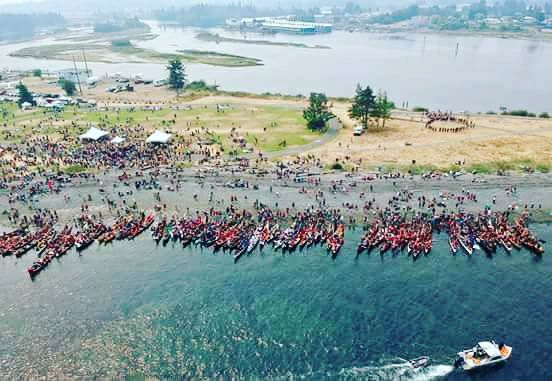 By Mark de Bruijn
This annual event is hosted by a different 1st Nation or tribe somewhere on the Pacific Northwest Coast. This year it was the Wei Wai Kai Nation of Campbell River and the Wei Wai Kum Nation of Cape Mudge on Quadra Island that co-hosted it, August 4-10. The theme of this year’s Journey was Standing Together, and it certainly lived up to this vision! Native peoples from up and down the Pacific Northwest Coast came to stand together as they continue to rediscover their cultures, languages, and most important, their strength and dignity.
One of the largest such events yet, Standing Together saw over 100 traditional west coast canoes from deep in Puget Sound to Haida Gwaii paddle their way to Campbell River. With their support crews, over 1000 people were involved in the paddling, which included men and women and children of all ages.
The canoes arrived at Cape Mudge on Friday afternoon, Aug. 4, where they were welcomed ashore in traditional fashion by the chiefs of the Wei Wai Kum, accompanied by singing and drumming. A number of dignitaries were on hand to add to the welcome with some inspired speeches. Then on Saturday all paddled over to Campbell River’s Tyee Spit, part of the traditional territory of the Wei Wai Kai Nation. With ceremony, speeches, singing and gift giving, each paddling family was received in turn by the local chiefs.
After all had been welcomed, everyone reconvened on the grounds of the Thunderbird Hall for a huge feast. It is estimated the crowd swelled to over 7000 people by this time, enjoying enormous quantities of halibut, salmon, oolichan, roe, potato salad, buns and various other goodies, all prepared and served by an army of volunteers. It was a massive undertaking, run incredibly smoothly by the two hosting Nations. During the feast various Nations and tribes spontaneously broke into powerful song and drumming, and there was much merriment as people from all over the Pacific Northwest Coast reconnected with each other and met new friends.
Celebrations and ceremony continued in the Thunderbird Hall big house for 5 more days, as the various peoples honored each other, sang their songs, told their stories, and presented gifts.
To contribute to this historic event, the local riding association of the Green Party of Canada volunteered to run a refuse and recycling program on Saturday for the big feast, as well as at the Tyee Spit welcoming ceremonies. You can imagine the mountains of paper, plastic, empty water bottles, pop cans, and excess food such a crowd generated! Green Party volunteers manned three different recycling stations, and for most of Saturday we directed waste items into their appropriate bins, helped clean up, and engaged in many conversations about recycling and sustainability. It was a wonderful opportunity for Greens to give to the community, to show our support and appreciation for 1st Nations people, and to help educate the public about recycling. It was a privilege to be present at such a large traditional native event, and to witness the growing bonds up and down the coast as 1st Nations support and celebrate each other and “stand together.” 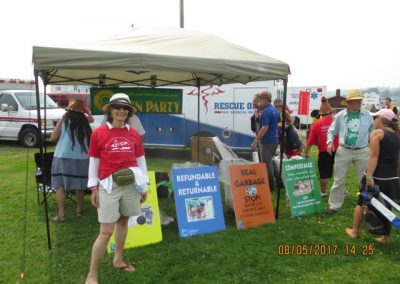 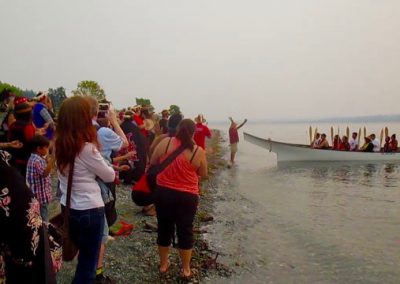 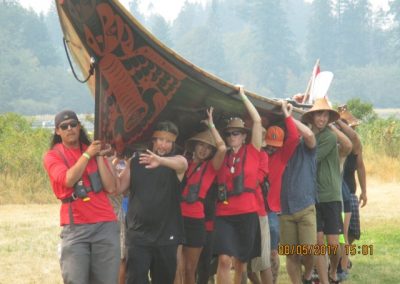 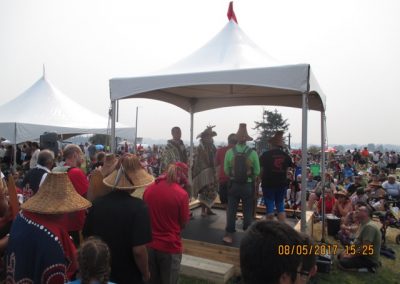 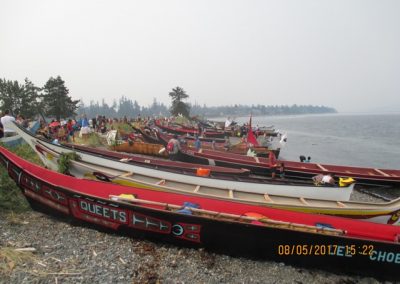 Some of the 100+ canoes after coming ashore, Tyee Spit

Some of the 100 canoes after coming ashore at Tyee Spit 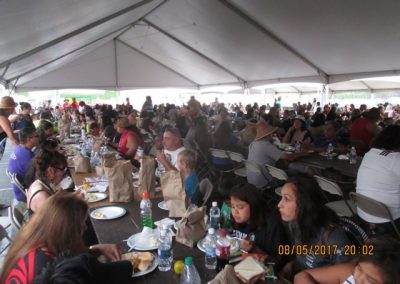 Some of the 7000+ visitors at the big feast, Campbell River 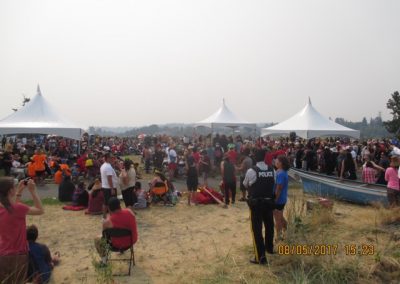 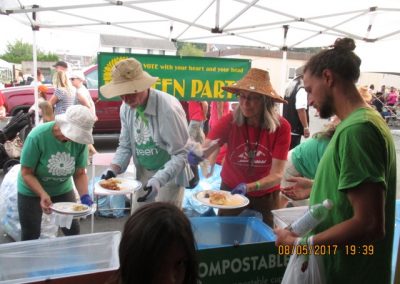 Busy times at the recycle centre at the big feast

Busy times at the recycle centre at the big feast