After the BC Green Party AGM in Sidney, on Sunday morning, August 20, 2017, we had a gathering of Federal Green Party EDAs whose members were also attending the AGM.  Wally Kunz, CEO of Vancouver East EDA, had the foresight to ask why not get together, since many of us will already be in Sidney.  So Wally organized this 3-hour Sunday morning Green storming session (like brainstorming only about Green issues).

Below is one of our members’ summary, which I think covers it very well:

The Green storming session that followed the Convention introduced us to a way of conducting meetings — particularly those in which the sharing of ideas and vision is the purpose — that allows everyone present to have an equal opportunity to be heard, in which all views and ideas are welcome and not censured, and in which no one person or group gets to dominate the conversation. There is the perception that such meetings are unplanned, unstructured, and therefore potentially a recipe for chaos. In fact, such a meeting takes careful planning, but it’s done in such a way as to be almost invisible. 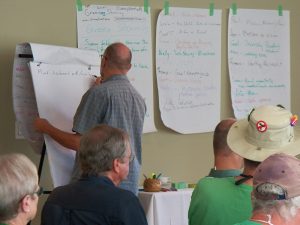 What we experienced was a meeting that ran almost seamlessly, in which the agenda was driven by the ideas of the attendees, and everyone was heard. Miraculously, the meeting ended when we all ran out of things to say, right on time! This approach generated lots of rich ideas, many of which will no doubt bear fruit in the months ahead in the work of the various EDAs present.

The big bonus was that we all met fellow Greens from other EDAs whom we would otherwise not have come to know. New friendships were forged, with lots of networking and sharing of ideas and stories. Underpinning all this was the growing sense of community that bonds us together in our exciting work of waking up the nation to a new possibility for how we govern ourselves and reshaping our society into a sustainable, thriving and healthy organism that enhances the planet rather than denigrates it. A big vision, but one worth living for!