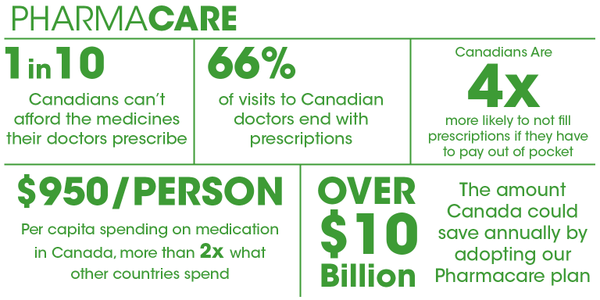 (OTTAWA) –  Elizabeth May, Leader of the Green Party of Canada and MP (Saanich – Gulf Islands), unveiled the Green Party’s national Pharmacare plan to make affordable medicine a reality for all Canadians while saving billions of dollars.

“The Green Party will work with all federal parties, provinces, and stakeholders to implement Phase II of Canada’s universal healthcare system – A national Pharmacare Program. We know that an overwhelming 91% of Canadians fully support this plan,” said Ms. May. “This plan ensures that 2 million Canadians would have access to prescriptive medications that they otherwise could not afford. Moreover, the Green Party approach will apply greater rigour to drug registration by applying the approach of the UBC Therapeutics Initiative. We will not register drugs that hurt more people than they help.  Not only will it improve the health of Canadians, it will save up to $11 billion annually. It just makes sense to do this and do it now.”

“A national Pharmacare program is the missing piece from one of our greatest achievements as a country: universal healthcare,” added Jo-Ann Roberts, Green Party candidate (Victoria). “A Victoria voter recently told me that he moved to B.C. while battling cancer and discovered that his medication, which cost $10,000 per year and was covered in Ontario, was not covered in BC. He ended up paying out of pocket and is still paying off that debt. We need a national Pharmacare program that provides fair and equitable access to medicine for all Canadians.”

“It has been five years since the Premiers discussed setting up an agency to reduce the high cost of medicine through the bulk-buying of prescription medication,” concluded Daniel Green, Deputy Leader of the Green Party of Canada and candidate (Ville-Marie – Le Sud-Ouest – Île-des-Soeurs). “Our plan will reverse Canada’s sad reputation of being the second highest per capita spender of medicine in the world after the United States.  Our plan will also provide universal healthcare coverage for medicine and keep prices under control. The time has come to make Pharmacare a reality!”

For more information, see Backgrounder: A Prescription for Healthier Healthcare.

Professor Steve Morgan, content expert and lead-author of the Pharmacare2020 report (which was endorsed by over 110 professors of health policy and medicine across Canada), along with co-authors Professor Marc-André Gagnon, will be available to answer questions regarding the Green Party’s Pharmacare plan with the media.