In early August 2020 a group of Forest Defenders known as the Rainforest Flying Squad (RFS), with support from Pacheedaht elder Bill Jones, blocked a logging road on the west side of the headwaters of Fairy Creek.  Teal Jones, the tree farm license holder (TFL 46), was planning to build a logging road into upper areas of the Fairy Creek watershed to clearcut this ancient ecosystem.  Over the fall and early winter 2020 Teal Jones employees and contractors withdrew from this area.   Snow came to block any access to these upper areas and RFS set up River Camp on Granite Main to block east side access to Fairy Creek.  In spite of the cold / rain / snow these RFS defenders stayed through the winter.

In February 2021 Teal Jones sought an injunction to block Forest Defenders from roads and lands in their tree farm license (TFL 46).  Over February and March Forest Defenders starting coming from across British Columbia, Canada and the globe to defend these ancient ecosystems.  On April 1st (April Fool’s Day) the judge issued an injunction blocking access to roads and lands in TFL 46.  Fallers working for Teal Jones also rushed into the adjacent Caycuse watershed and on the Good Friday, Easter weekend they cut a large number of ancient trees.  The RFS then moved in to establish camps and block access to these ancient trees in Caycuse, Walbran,  and Fairy Creek (Waterfall / Ridge / Granite Main camps).

In early May 2021 the RCMP moved to blockade and then invade the Caycuse Forest Defender’s camp.  Here we first saw some of the lying, deceit and violence of the RCMP in their campaign to remove the peaceful Caycuse Forest Defenders (some of whom were locked in to roads or in week-long tree sits).  The RCMP blocked access to Legal Observers and the media to ensure no one saw the violent processes they were using to arrest ecosystem defenders and to destroy camps.  Through the spring and early summer, during the June / July heat dome and the forest fires, more ecosystem / forest defenders continued to gather from across BC/Canada/the Globe to defend these ancient ecosystems.  The RCMP came with their guns, dogs, helicopters, ATVs and big machines all funded by us, the Canadian taxpayers.  During the spring and early summer it was a bit of a cat and mouse campaign but the RCMP lying, deceit, violence and unsafe extractions (cutting legs off 30 foot tripods with peaceful forest defenders locked at the top) was seen repeatedly!  The invasion of the Headquarters camp on the bottom of Granite Main on August 9th was the start of a three month long peaceful guerrilla campaign to continue to protect these ancient forest ecosystems on both sides of Fairy Creek. Teal Jones attempted to get their injunction renewed in September but a BC Supreme Court judge refused based on the processes and the violence used by the RCMP. He noted they were “putting the reputation of the court into disrepute”!!  The BC Court of Appeals has since temporarily put the injunction back in place but after 6 weeks the Court has still not come out with a decision.

These blockade actions have continued through the fall rains and now into snow at higher elevations.   There have been more than 1181 arrests so far, the most of any act of civil disobedience in Canada, and all the RCMP and Court actions have been funded by us the taxpayer.  Various freedom of information requests have found that these RCMP actions alone have cost us more $6,000,000!!  It is now time to write your politicians and protest on the streets to let them know that the preservation of the ancient ecosystems is essential if we are to leave our planet resilient to the challenges of the climate crisis!

There continues to be a presence of Rainforest Defenders at Granite Main to show that this is an ongoing campaign to defend these ancient ecosystems.   In early December a group of 30 elders from the Comox Valley, Powell River, Gulf Islands and Victoria drove through the early morning hours to block access by RCMP and Teal Jones to Granite Main and to highlight the ongoing importance of stopping logging of ancient ecosystems.  If you would like to participate in this important work please come prepared to camp in winter at Granite Main, or if you cannot do this then consider donating to supply food, firewood, supplies and legal costs ( https://laststandforforests.com). 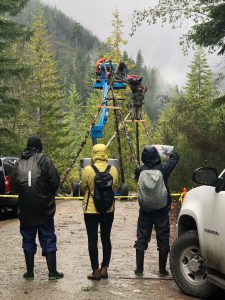 Media observe a safer extraction off of a 30 foot tripod after RCMP methods are challenged. 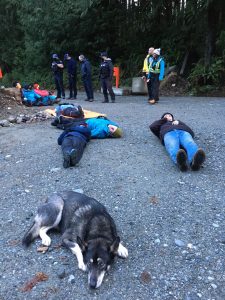 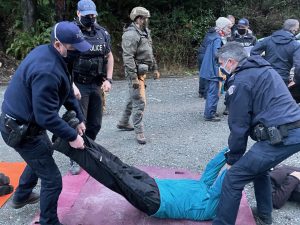