But BEFORE YOU GO TO THE SURVEY, check out Fair Vote BC’s guide to the questionnaire.  Fair Vote has gone through the survey and provides thoughts on the questions.

Fair Vote Comox Valley is also now accepting donations.  If you can’t give your time, here is your opportunity to support this campaign over the next year.  E-transfers can be made to:  fairvotecomoxvalley@gmail.com.  If you do an e-transfer, please put your name in the Note field and some sort of contact information so we can thank you.

In order to get to a 50+1 Yes vote on the referendum, we need your help to counter the opposition’s hyperbole.  This is our moment to change BC’s electoral system.  Get in on the action!  Contact Megan at m.ardyche@gmail.com if you’d like information on participating in any way.

New system, or next catastrophe?  Your vote.

Perspective on how democracy is undermined:

“They [the anti-PR side] don’t have to convince or find solutions. They just have to sow doubt and avoid the debate. … Strategically they only need to ‘minimize public spaces where dialogue might occur and where it does occur, confuse it and obscure it. The idea is to kill debate, not foster it.’… The key to their success is to sow doubt and limit our sense of what’s possible.” (From I’m Right and You’re an Idiot, as quoted in Thomas Teuwen’s weekly Supporting Elizabeth May blog, January 7, 2018.)

Barb Dobree was one of two winners of NIPR’s prizes. Barb’s name was drawn from the list of people who commented on stories on NIPR’s website. 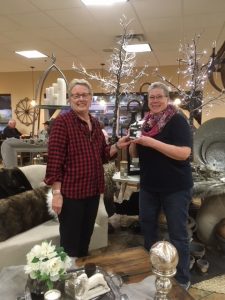 On January 8, 2018, I presented Barb with her Beautiful Me Spa Package, generously donated by Trina McNiece.

BC Bill 11 regarding organic labelling

In this Decafnation article, Arzeena Hamir examines new regulations for use of the designation of organic on produce.  She also explores how this will affect small farmers and, even more specifically, includes a section on the impacts that will be seen in the Comox Valley.

David Suzuki now has an opinion column in Black Press

January 11, 2018, was the inauguration of David Suzuki’s “Science Matters” column in the Viewpoint page of The Record.  When The Record had announced last week that Suzuki was going to have a regular Opinion column, I wrote to the editor saying that science was not opinion and shouldn’t have to be in the same location as, for example, Tom Fletcher’s opinions, which are most decidedly not scientific.  The editor of The Record came back saying that Suzuki himself called his column an opinion piece, and that was that.  Now the first column is out.  It’s a barn-burner, and essentially has the entire (Global) Green Party blueprint for how to address global catastrophe.

There’s a summit on Site C happening in Victoria January 26-27, 2018.  The event will also be live streamed on YouTube.

Overheard at the bank, B.C. Hydro’s first meeting with the loans officer

Dermod Travis of Integrity BC has written a laugh-until-you-cry-from-despair script for what the conversation between B.C. Hydro and a loans officer might sound like.

DeSmog Canada did an end-of-year interview with Andrew Weaver and asked him “to reflect on the last seven months of cooperation with the NDP government and what he anticipates 2018 holds for some of B.C.’s most pressing energy and environment concerns.”  In response to question 3, “What has emerged as a memorable low point,” Weaver names 7 such low points.  A sad commentary for BC.

Exploring beyond what’s possible today, is what building a better tomorrow is all about. And that demands dialogue. Elizabeth is embarking on her 2018 January Town Halls shortly and you can find one near you by visiting Elizabeth’s new MP Facebook Page (please like and share) or her website. Adam Olsen is continuing to set new standards in how an MLA’s constituency office engages the community by holding not only Town Halls, but Community Dialogues. You can check that schedule by visiting Adam’s Facebook page or his website.  (Taken from Thomas Teuwen’s blog, Supporting Elizabeth May, January 7, 2018.)

Control of the media, Cont’d

Following up on last week’s pieces on control of the media, here’s a Canadian version from The Tyee.

Excerpt:  “When the country’s two largest chains swapped 41 newspapers in Ontario a few weeks ago and announced that almost all would be closed, they basically thumbed their noses at Canada’s competition laws.”

The Tyee article talks about BC as well, and is supported by this piece from the Ryerson Journalism Research Centre from earlier in 2017, looking into predatory ownership of rural newspapers.  The Ryerson piece references Marc Edge, a professor at both Canada West University and the University of Malta, “[Edge] said newspaper owners have been happy to leverage the hard-times myth for regulatory leniency. In British Columbia, he said, the Competition Bureau, the federal agency tasked with investigating anti-competitive behaviour, has been ‘derelict in its duty.’ Since 2010, Glacier Media and the Black Press, which collectively publish nearly 150 community newspapers in B.C., have bought, sold and traded newspapers, and then proceeded to close 20 of them after they changed hands. One 2014 exchange included a total of 15 newspapers, Edge noted, of which more than half have closed. Their dealings, he said, have created regional monopolies in B.C.”

This was forwarded to me by two of our supporters.  I am so heartened at how engaged we all are!

Just now, New York City Mayor Bill de Blasio announced plans to divest the city’s pension funds from fossil fuels. As if that wasn’t a big enough moment on its own, he also announced a lawsuit against some of the world’s biggest oil and gas corporations for the damage caused by climate change.

It’s huge news that a city as iconic as New York is picking a legal fight with some of the largest fossil fuel companies in the world.

At a moment like this, when the tide is so clearly turning against the fossil fuel industry, it’s absurd that the Canadian government is moving in the opposite direction by expanding the tar sands — one of the dirtiest oil reserves in the world. As you’re reading this, Justin Trudeau and the Canadian government are reviewing the largest open pit tar sands mine ever proposed, Teck Frontier, without consideration for climate change or Indigenous rights. Thanks for signing the petition calling on the Trudeau government to give Teck Frontier a proper review. We want to deliver your signature along with thousands of others but before we do that, we need to double the number of signatures on this petition. Can you convince one other friend to sign this petition?

New York just added $200 billion — including tens of millions invested in companies operating in the tar sands — to the nearly $6 trillion in endowments and portfolios that have already been divested. When we dreamed up the idea of fossil fuel divestment in 2012 we were thinking: some colleges and some churches will do this. We didn’t dare dream that half a decade later one of the richest cities on earth would lead the charge.

We’ve seen a series of announcements recently that give us real hope for the future. Norway announced its state oil fund will divest from oil and gas. France announced it would ban any new oil and gas exploration anywhere on its territory. The World Bank announced it would cease funding new fossil free projects anywhere in the world. And of course, in 2017, the movement in Canada stopped Energy East — the largest tar sands pipeline ever proposed.

Momentum is on our side. We are at the beginning of something truly awe-inspiring in 2018. And that’s thanks to all sorts of folks coming together to stand up to the big greedy bosses of the fossil fuel industry. Our future is a Fossil Free one. Let’s show Prime Minister Trudeau that we believe this to be true here in Canada. Help us add just one more name to the Teck Frontier petition.

PS – You can watch the full announcement from the NYC mayor here.

Masculinity and the Environment

“Alpha males think caring about the environment is too ‘feminine’ … So let’s make saving the planet a bit more macho.”  This essay in The Guardian made me laugh out loud, but the topic is serious nonetheless.

We’re in a giant car heading towards a brick wall and everyone’s arguing about where they’re going to sit. (David Suzuki)