The BC government consultation site for the 2018 referendum is up.  They are looking for feedback between now and February 28, 2018, at 4 p.m.   Everyone please check out the questionnaire and make a written submission if you think some of the questions are too confusing or obscure.  For example, they have a PR system called MMM which Terry Dance-Bennink of Fair Vote BC says she’s never even heard of.  There are links to read about different systems, the questionnaire, and for written submissions to citizenengagement@gov.bc.ca.

But BEFORE YOU GO TO THE SURVEY, check out Fair Vote BC’s guide to the questionnaire.  As you may remember, the Federal Liberals created a similar MyDemocracy.ca for supposed consultation when Justin Trudeau decided to throw out his promise of electoral reform.  Many of those questions were obviously designed to be confusing, or were impossible choices.  Fair Vote has gone through the survey and provides thoughts on the questions. 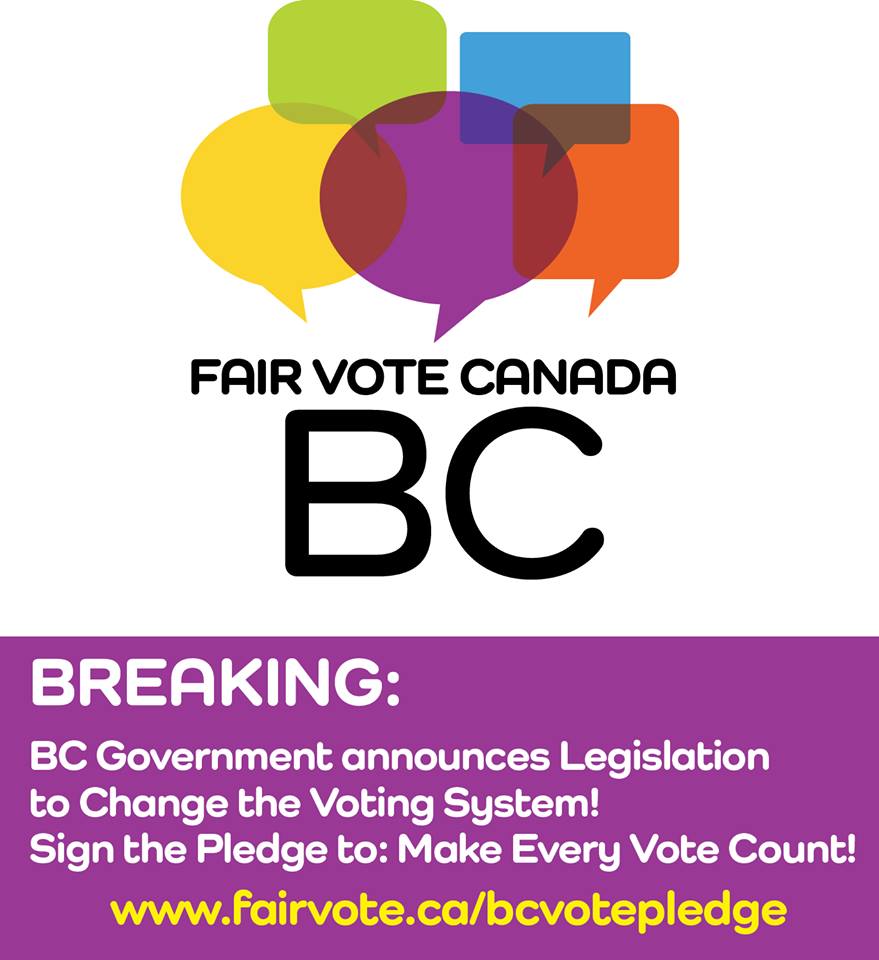 Fair Vote Comox Valley currently has 12 working groups:  Community outreach; FVCV-led discussion groups; foot canvassing; phone calls; FVCV-created public events; public speaking; social media; Finding tabling opportunities at community events; staffing tables and events; talking points/messaging; a writer’s group, and bakers/goodie providers; we need more people, though.  This is your opportunity to make a profound difference in BC politics; if you are interested in participating in any of these groups, please contact Megan Ardyche, m.ardyche@gmail.com.  We are having another planning meeting January 13 from 2-4 p.m., location to be announced.  This will be a get-together of all the volunteers before they break into their separate working groups.  You are welcome to attend.

Fair Vote Comox Valley is also now accepting donations.  If you can’t give your time, here is your opportunity to support this campaign over the next year.  Cheques payable to FAIR VOTE COMOX VALLEY can be sent to: 203-2202 Lambert Drive Courtenay BC V9N1Z8.  E-transfers can be made to:  fairvotecomoxvalley@gmail.com.  If you do an e-transfer, please put your name in the Note field and some sort of contact information so we can thank you.

Those who oppose electoral reform are mounting a near-hysterical fear campaign that proportional representation will result in our Legislature being dominated by Nazis and by racists.  As William Kaplan states in Why Dissent Matters, “Whenever there is a large, well-financed, and organized campaign against a person or an idea, it is time to pay attention” (110).*  The opposition to electoral reform are most definitely well-financed and organized.  The Liberals leadership candidates are making defeating PR their one and only issue.  They are terrified there will be a more effective democracy.

In order to get to a 50+1 Yes vote on the referendum, we need your help to counter the opposition’s hyperbole.  This is our moment to change BC’s electoral system.  Get in on the action!  Contact Megan at m.ardyche@gmail.com if you’d like information on participating in any way.

These 16-21 year-olds from across BC are taking over the Legislature right now.  The Early Edition did an interview with the Youth Premier, Sky Losier.  These young people are active in their communities throughout the year.  They’re debating the Site C dam issue and will forward the outcome to MLAs.  In terms of youth engagement, Mr. Losier says there is a lot of room for improvement.

Elizabeth May’s optimistic prediction for 2018 is:

”The Ghost of Christmas Past visits Donald Trump and he is a changed man. He phones Justin and Sophie to join his lonely Christmas Day. A remade Donald champions action on climate change proclaiming, ‘the only place for a lump of coal is in the Christmas stocking of a bad child—and there are no bad children!’ He calls Cath McKenna to ask if it is too late to join the coalition to phase out coal, giggling like a happy child, ‘it’s not too late! I still have time!’ And it was said among the DACA children, the Dreamers, that there was never a more generous soul or champion of their rights than the Donald.” (Maclean’s Magazine, January 2018, p. 24.)

…and her Christmas and New Year’s message.

While the story is mind-boggling enough, but what was ironic about this page was the brief Canada 150 ad playing in the middle of the story.  This was flashing scenes of how wonderful it is to live in Canada.  When I went back to look at it again it wasn’t there but when I went back in the next day, there it was again.  It was part of the Canadian Heritage YouTube site.

And now for a moment of beauty

This video is short, but stunning, and optimistic.  Appropriate as we move into 2018.

“The Science of Government it is my Duty to study, more than all other Sciences: the Art of Legislation and Administration and Negotiation, ought to take Place, indeed to exclude in a manner all other Arts. I must study Politicks and War that my [children] may have liberty to study Mathematicks and Philosophy. My [children] ought to study Mathematicks and Philosophy, Geography, natural History, Naval Architecture, navigation, Commerce and Agriculture, in order to give their Children a right to study Painting, Poetry, Musick, Architecture, Statuary, Tapestry and Porcelaine.”  (John Adams in a letter to Abigail Adams, May 12, 1780)