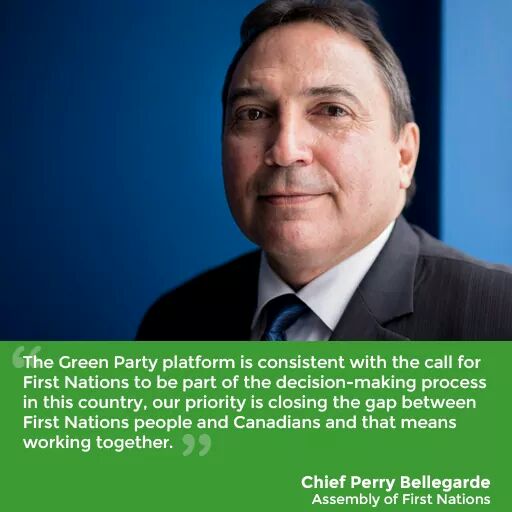 “The Green Party platform is consistent with the call for First Nations to be part of the decision-making process in this country,” said AFN National Chief Perry Bellegarde. “Our priority is closing the gap between First Nations people and Canadians and that means working together on a comprehensive and coordinated plan for action. The Green Party plan for a Council of Canadian Governments would respect First Nations jurisdiction to drive solutions based on the priorities of our people and our communities.”

Green Party Leader Elizabeth May released the platform in Vancouver September 9. The plan outlines a number of commitments related to First Nations, including a commitment to remove the two per cent annual cap on funding and to call a National Inquiry on missing and murdered Indigenous women. Other highlights include the intent to partner with First Nations for responsible resource development, good faith negotiations to settle land claims, establish Treaties and self-government arrangements and to repeal the Indian Act if First Nations provide consensus. The platform also includes a housing strategy, $800 million for basic infrastructure on reserve and new federal funding for culturally appropriate education in traditional languages.

The AFN will share with First Nations a comprehensive analysis and assessment of all announcements made during the election period prior to October 19.