by Pat Carl and Megan Ardyche

More than 30 people attending the North Island-Powell River (NIPR) Green Party AGM in Campbell River on June 16 heard from the David who defeated the provincial Goliath and saved the Shawnigan Lake watershed.

Not so David-like anymore, Sonia Furstenau, Deputy Leader of the provincial Green Party and the MLA representing the Cowichan Valley, held listeners enthralled as she related a conversation she had with her 12-year-old son.

When asked by Furstenau how he was feeling about his future, her son responded “not so good.”

“Why not?” Furstenau asked.

“Because of pollution,” he said, “and climate change, and Trump.”

A sobering assessment for one so young. His response, though, prompted Furstenau to think of her own experience in organizing community members. Such organizing in Shawnigan was successful and taught Furstenau the value to hope.

While the federal government continues to “look backward by doubling down on the decreasing returns” associated with resource extraction, Furstenau claims new approaches rooted in education must encourage the development of innovative technologies to secure a healthy, sustainable future for our children and the planet.

To refuse to embrace such a future is to “download the cost of climate change onto local communities,” stemming from the numerous forest fires and the catastrophic flooding that plagues Canada and the rest of the globe.

This lack of collaboration leads to polarization. Observing this at first hand fuels Furstenau’s support for proportional representation. The provincial referendum, scheduled in six months, gives voters a chance to reform BC’s electoral system. Such reform will lessen the “community fractures along party lines” as candidates will “no longer seek to destroy the opposition” because they will need to work together, if elected, to develop long-lasting policies that benefit British Columbians.

According to Furstenau, “Fear drives the anti-proportional representation campaign. The antidote to fear is hope.” Despite challenges, Furstenau continues to be hopeful about her son’s future.

Accompanying Furstenau to Campbell River was Sonia Theroux, the Green Party of Canada Director of Mobilization, who describes herself as loving governance, but not politics. She talked about the importance of doing politics differently - of listening to voters. She encouraged Green Party members to step-up their organizational and volunteer efforts within their communities, between elections. Don’t look to others to do the work. “If it’s your idea,” Theroux said, “it’s your project.”

Business conducted at the AGM included the election of a slate of candidates to the North Island-Powell River’s Electoral District Association (EDA). Each person standing for the Executive gave a 1-minute speech about themselves and their interest in serving on the Executive.

Beginning his third year with NIPR is the new CEO,  Mark de Bruijn, who became involved with NIPR during the 2015 election. He said when the position of CEO opened up this year, he “felt called” to do that work. Also entering his third year is Mark Tapper who spoke about Stephen Hawking, whose ashes will be interred in Westminster Abbey with the likes of Charles Darwin and Sir Isaac Newton.  According to Tapper, Hawking said that, “…no matter how difficult life may seem, there is always something you can do … It matters that you don’t just give up.”

Three members of the Executive are entering their second year: Jay van Oostdam (who is the financial agent), Megan Ardyche, and Cynthia Barnes. Rounding out the Executive are three new members:  Blair Cusack, Gail Wolverton and Terry Choquette.

From the way everyone spoke about their commitment to the Green Party and to NIPR, the year ahead sounds like an exciting one. And it was clear that NIPR, and the Green Party of Canada, are not planning to give up, but rather are committed to ensuring we leave Furstenau’s son, and all our sons, daughters, grandchildren and great-grandchildren a healthy and sustainable future.

Business conducted at the AGM included the election of a slate of candidates to the North Island-Powell River’s Electoral District Association. 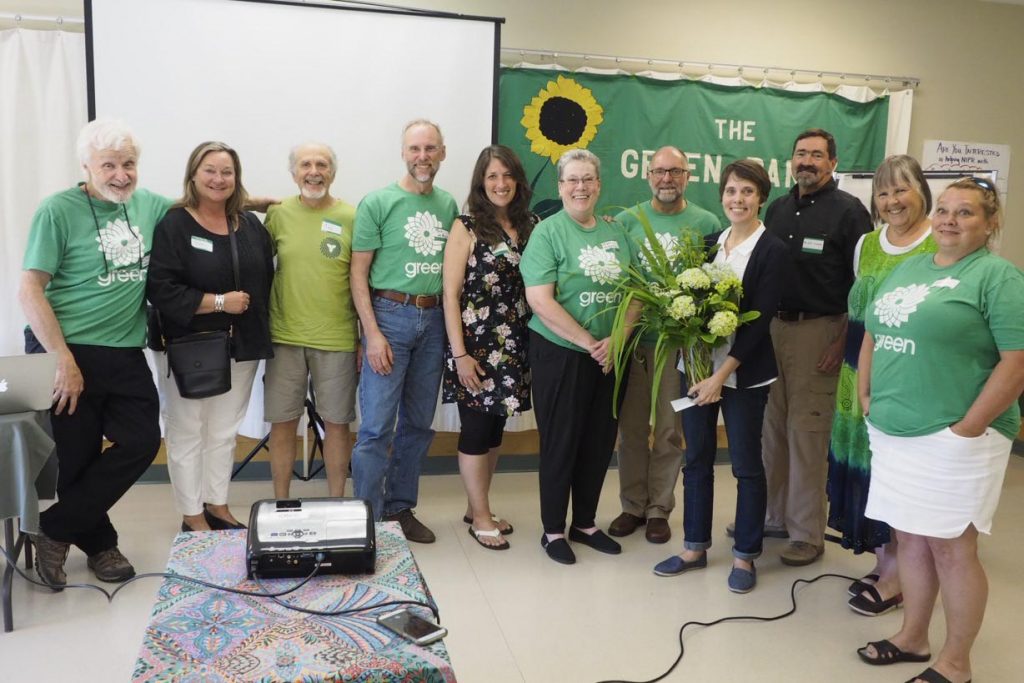